Posted by Lincoln Atheists at 6:44 AM

Lincoln Atheists Billboard is Down

Lincoln Atheists was informed on October 18, 2016 by Lamar Advertising Company that they made a business decision to pull and remove the Lincoln Atheists billboard at 1648 South St. in Lincoln, Nebraska. This decision was based on customer complaints via the property owner. An alternative location was not available to relocate the billboard.

While Lincoln Atheists understands and respects Lamar's business decision, collectively we are very disappointed that atheists are not afforded an equal platform in the marketplace of ideas. However, we are not deterred in pursuing our mission.

Lincoln Atheists is a non-profit educational organization dedicated to building a positive community for non-theists; fostering secular viewpoints; supporting charitable contributions to society; protecting and promoting the separation of church and state.

Lincoln Atheists Billboard is Up

This year, Lincoln Atheists funded a billboard to advertise our presence in the capital city.  We want people to know that "the Good Life" is possible without God.  We also hope that other nonbelievers will be interested in joining Lincoln Atheists and becoming a part of our organization.

The billboard is located just off the corner of 17th and South Street in Lincoln.

We encourage you to check it out if you are in the neighborhood. 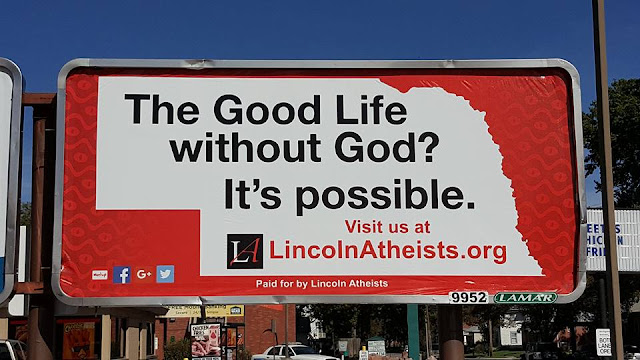